Armada is the first naval wargame in an unrelated series of real-time wargames with isometric perspective by Peter Turcan. Unfortunately, it is also the most obscure due to much more limited distribution than his previous games. As veteran wargamer observes in his concise capsule review of the game: "[Armada is] a British product... [that] covered the defeat of the Spanish Armada (1588) by a motley crew of English adventurers, opportunists and patriots. Using a "commander viewpoint" and typed-in commands, it was somewhat difficult to learn the basic system, but it presented a unique perspective." Overall, Armada is an interesting application of ground-based game engine used in Borodino 1812 to naval battles, but probably still too "dry" and clumsy for an average wargamer. Still, the second Turcan game based on this system, Dreadnoughts, improves over this spiritual predecessor in many ways, so you might want to check that one out. 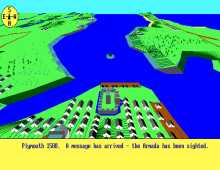 People who downloaded this game have also downloaded:
Armada 2525: Deluxe Edition, Battle for Moscow, 101 Airborne: The Airborne Invasion of Normandy, Battle of Antietam, 7 Cities of Gold