Possibly the best Yahtzee game ever made for the PC, AllFive 2000 is an excellent—and free! - game from UK developer Bongosoft. If you have never played Yahtzee before, the rules of this luck-and-skill gambling game are similar to Poker, and are very easy to learn. The idea is to throw five dice, keep back promising-looking combinations such as three sixes, and throw the others again, up to a total of three throws. Then the score is placed in one of thirteen boxes, each of which has rules attached to its use. For example, placing a score in the "Full House" box is worth 25 points, but you must have three of one number and two of another. The choices of which dice to keep or re-throw and which score box to use each turn make the game as dependent on skill as it does on luck.

In addition to solid implementation of Yahtzee rules, AllFive 2000 sports very pleasant 16-bit graphics and music (most of which are by classic composers such as Beethoven), both of which can be customized to your heart's content. For instance, you can play your own CD music if you get bored of the 45 music tracks included in the game, or change the backdrop to any other picture. Up to 4 players can compete per game, and the game keeps track of your best scores as well as profiles of up to 8 players.

The game also has many other useful features including undo, timer, and excellent help screens that explain every option in the game. You can even get advice on what to do next simply by pointing at the dice for a few seconds. Overall, AllFive 2000 is simply a must-have for dice fans and anyone interested in parlor games in general. 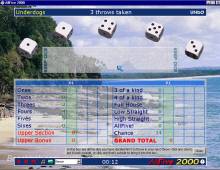