Aces High is one of those solitaire games that are easy to learn, but are insanely addictive. In this game that is similar to, but much tougher than, Klondike, your objective is to get rid of all of the cards except the aces. Each turn, one card is dealt to each of the 4 columns. If any two of the "open" cards (last cards in each column) have the same suit, you can click on the lower ranking card will remove it. For instance, if you have a 4 of clubs and a 5 of clubs, clicking on the 4 of clubs will remove it from the colum. If you manage to get rid of all the cards in any one column, you can double-click on an open card and move it to the empty column. If you enjoy solitaire games in general, you will find Aces High to be among the best. It does not rely too heavily on luck to make your skills irrelevant, but it is also not too difficult to win. As in most solitaire games, planning ahead is crucial. With a clean Windows interface and fun gameplay, Aces High is a good candidate for a coffee break time waster. Recommended! 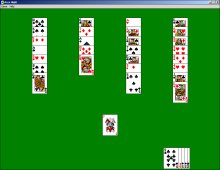