One of the best solitaire games I've ever come across, 35 Card Solitaire is an excellent PC version of a challenging solitaire game that requires more skill than it may at first appear. The object of the game is to eliminate all 35 cards from the initial card layout (7 columns each consisting of 5 cards) by moving the bottom cards in each column (i.e. the "exposed cards") to the discard pile. You can only place cards whose face value is one higher or lower than that of the discard pile. For example, if the top card of the discard pile is a 5, you can only place a 4 or a 6 on it. Aces are the exception to the rule, because you can only put a 2 on them - no Kings are allowed. In addition, Kings tend to block the play because no card can be played upon them - forcing you to draw the next card from the pile. You are only allowed to go through the discard pile (which starts out with 16 cards that aren't in the initial layout) only once.

The game is very addictive because unlike most solitaire games that only depend on luck, 35 Card Solitaire requires both a keen memory and strategic planning skills. It is also very challenging because it is hard to "win" (i.e. clear out all 35 cards) - you need a lot of luck in addition to flawless play. The great thing about the game is that good skill really can overcome bad luck: for example, even if you get a bad initial layout (perhaps with 3 Kings all at the bottom of the columns and no obvious sequence of play to execute), you can clear a lot of cards with astute skill. For example: if you have a choice between 2 cards of the same number, picking one that can lead to a great sequence is advantageous. To give a numerical example: you have a choice between a 4 of Hearts and a 4 of Clover. Five other exposed cards are numbers you can't play (say, they are 6, Queen, 2, 9, and King). Discarding the 4 of Hearts will expose a 3 of Spades (i.e. the next card up in the same column), while discarding the 4 of Clover will expose a Jack of Diamond. In most circumstances, you should discard the 4 of Hearts because you can then discard both the 3 of Spades AND the 4 of Clover (since 4 is 3+1). If you discard the 4 of Clover, you are stuck because you can't discard anything else. Much of the game involves this kind of decision making that makes it very challenging and addictive.

Overall, I find 35 Card Solitaire a refreshingly fun solitaire game that I keep coming back to during coffee breaks. If you think all solitaire games are boring and completely contingent on luck, this is the one game that will change your mind. 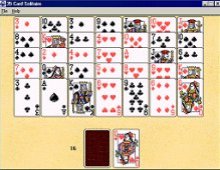