Xeno 2002 is a fun remake of Xeno, an old 8-bit Spectrum ZX classic from 1986. Xeno is a futuristic sports game for 2 players that plays like air hockey. Though the goal is the same (score more goals than your opponent) and the looks similar (a puck on ice rink), the actual gameplay is quite different from air hockey: each player moves a cross along the ice, and shoot towards the cross, hopefully coming into contact with the ball along the way. The game is fast, fun, and very easy to learn. However, it fails as a one-player game because the AI is so incompetent it is very easy to beat.

Xeno 2002 is very faithful to the original, but looks much better in SVGA graphics - with multiple camera angles. It also plays better due to the improved AI and control scheme, and many new extras are added including "free-for-all" mode, action replays, and a more realistic physics engine than Xeno. If you love the classic, you will love this remake. If you have never played the original but enjoy ice hockey/air hockey games, Xeno 2002 will be a pleasant surprise. 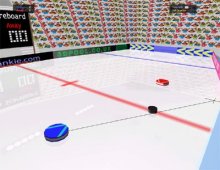