NHL Open Ice is an excellent PC conversion of Midway's hit arcade game of the same name. Licenced by the NHL and NHL Players' Association, this two-on-two hockey game features over 120 real-life players from all 26 NHL teams. Like the arcade game, NHLOI features smooth animations, lots of power-up codes, special hidden characters, and many special modes such as "Big Head" and "Super-Goalie" that bear no resemblance to real-world hockey, but makes the game fun regardless. Hockey fans who prefer "realistic" games like FaceOff! or Wayne Gretzky Hockey will definitely be disappointed with NHLOI's disregard of realism and focus on arcade-game-style power-ups - something that doesn't make the game much different from, say, NBA Jam. But anyone looking for a quick hockey game to play against a friend or the computer will enjoy NHL Open Ice once in a while. Recommended. 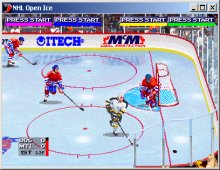