In the rarefied world of BMX racing, Dave "Miracle Boy" Mirra is a living legend in the extreme sports community. It is fitting, therefore, that Acclaim's Dave Mirra Freestyle BMX successfully captures both his talents and the adrenaline rush (and danger) of BMX racing for the computer. Simply put, Dave Mirra Freestyle BMX is to BMX racing as Activision's Tony Hawk games is to skateboarding. Which is to say it is an excellent sport game that offers plenty of tracks, numerous real-life riders, and a staggering amount of tricks you can perform - over 1,300 in this game.

Similar to Tony Hawk, DMFB follows the tried-and-true "challenge-based" formula: you are presented with challenges on each of the 12 courses, each with a mix of free-riding and competition. This translate into a great learning curve: as the boards get harder, you get better and can pull off more tricks. The game movements and controls are very similar to Tony Hawk, although the tricks are harder to execute and there is more to do in this game. As you would expect, the bike feels heavier and less agile than a skateboard, and this adds to the game's realism. In addition to a wide range of tricks and levels, the game even has some ingenious modes that you won't find in real BMX racing. For instance, your goal in one competition is to fall or crash the hardest - the more gruesome your crash looks, the higher your score will be.

Excellent gameplay aside, DMFB also does not disappoint in the graphics department. Thanks to thorough motion capture work by the Acclaim team, Dave and his friends' fantastic movements are presented realistically and smoothly, especially on systems equipped with a 3D card. Although it covers dirt, street, and vert, the only unfortunate shortfall is that the game lacks the flatland component to BMX that makes the sport what it is. But given the range of other gameplay modes, this absence is little more than a small nitpick.

If you have even the slighest interest in the extreme sport of BMX racing, Dave Mirra Freestyle BMX is a must-have. It's fast, fun, and has excellent replayability that will keep you coming back for more. Too bad Acclaim discontinued this PC version shortly after release in 2000, leaving only the console versions in the market. 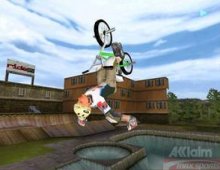