The first of two promotional titles sponsored by Norwegian oil giant Statoil, Statoil Ice Hockey is a fun, mindless Qix clone. In the game's language: "The objective of the game is to limit the space for the referee and your opponents to skate on by graying out as much of the ice as possible. If you manage to trap an opponent in one of the gray squares you draw, he will be penalized and not allowed back in that period. It's always the part of the ice where the referee is located that will be left and not grayed out. When having completed 80 percent of the ice you will win that period and after winning three periods you continue to the next game. The referee and the opponents may cancel your raid by intersecting the line you draw when trying to gray out the ice. If they succeed you'll lose one of your three chances. The same thing will happen if you haven't completed 80 percent before the time runs out."

Overall, a straightforward clone of a classic arcade game that's fun for a while, but gets quite repetitive after 5-10 minutes. Bodes well for E-Game's future titles, though... they have quickly grown into making truly great freeware games that offer twists to the original arcade concepts. 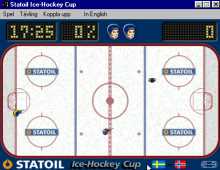