World Tour Golf is a solid oldie golf sim by Electronic Arts, co-designed by Paul Reiche III (Archon, Starflight). The game lets you play over a dozen well known courses, via a split screen that gives you an overhead view of the hole as well as a 3-D view. The game was sadly not as popular as Access Software's World Class Leader Board and Accolade's Mean 18, which came out around the same time. But World Tour Golf features a couple of neat ideas like computer-controlled players, lots of courses and an built-in course editor -- possibly the first editor ever seen in a PC golf game. 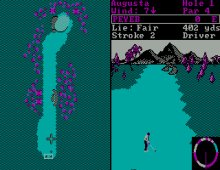