Accolade's oldie golf simulation with one of the longest game titles in computer game history, Jack Nicklaus' Greatest 18 Holes of Major Championship Golf (whew!) was instantly hailed as a classic when it was first released in 1988. If you know the more popular later Jack Nicklaus games, you will probably also know this one. Although this first release comes without a course designer, no VGA graphics, and features only PC speaker sound. Overall not a bad game at all, the option to play with various computer-controlled players including Jack Nicklaus is quite nice, and the three included courses should keep you playing for a while. A great start to a great, and highly underrated, golf series. 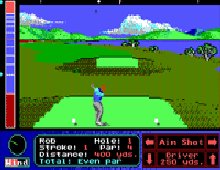