First in a long series of American football games that ends with '96 version, Unnecessary Roughness, released in 1993, is an ambitious football game that unfortunately suffers from an SVGA engine that was too demanding for most computers of the time, and a bad luck of having been overshadowed by the huge (but well-deserved) success of Patrick Cook's phenomenal classic Front Page Sports: Football Pro, which was released around the same time.

Unnecessary Roughness features a staggering amount of gameplay options that will please both arcade-inclined players and armchair coaches. You can choose to manage any team from the 1993 NFL season, leading them in match after match on the way to the Super Bowl. Field goals practice mode is available, as well as a single game for those times when you just want some quick action. On the gridiron, the players are well-animated, and look much better in SVGA than do players in FPSFP. The controls are intuitive-- using the gamepad for in-game control, and keyboard for field goals seem to yield optimal results. Although the game lacks many "deep" features of FPSFP or Tom Landry Strategy Football, such as a full-fledged drafting module, it does make up for it with an excellent "construction set" mode, which allows you to create new leagues, teams, plays, and playbooks from scratch. In-game comments from celebrity commentator Al Michaels also adds a lot of atmosphere to the game, and his comments are often appropriate and humorous.

Overall, Unnecessary Roughness may not boast the realism or long-term play value of FPSFP, but it does stand out on its own as one of the most enjoyable football games that strike a good balance between realism and fun, with emphasis on delivering furious gridiron action. Luckily, the series gets more recognition with each new release, with the 1996 version being the last and best. Highly recommended! 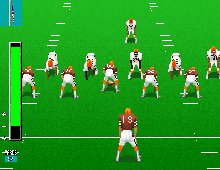