Probably the most obscure game that MicroProse published, Track Attack is a fun arcade-style futuristic racing game in the same vein as WipeOut or CyberRace. Released only in a few European countries, the game features nice graphics, multiple camera views and excellent multiplayer support via modem, serial connection, and 4-player LAN.

Although it doesn't look very different from other futuristic racers, Track Attack stands out with a few innovations. Chief among these is the 'Dynamic Track System' (DTS), which is something that fans of FPS games are famiilar with, but which have never really been used in racing games. DTS basically means "interactive, dynamically evolving tracks" - you can drive over switches to open doors, make jump ramps and blocks rise out of the road, bank the corners, or wreck havoc on your opponents' cars. Knowing and manipulating DTS to your advantage is the key to winning the race, since you will often have to hit a switch to open the doors to a crucial shortcut or next part of the circuit. At the same time, you have to avoid evil skull-shaped switches which will twist the road, making it bumpy and near-impossible to drive on. DTS can also simulate different surfaces of the road in real-time, including water, sand, snow, and (worst of all) oil. DTS definitely makes Track Attack a lot of fun and very different from other racing games. I had fun hitting all the switches in sight just to see what they do.

Although it is not meant to be a "realistic" racing game, the physics in Track Attack is admirable. Ramming your car into the wall or other cars results in the appropriate aftershock (as well as car damage). Collision detection in this game is top-notch, and the designers' attention to detail is admirable - you will see appropriate car debris of different sizes flying out, for example. Since you will *want* to ram your opponents' cars more than a few times to get ahead, this realism is appreciated. The computer players in the game also get top marks for being challenging without cheating.

There are dozens of tracks in Track Attack, each of which has its own background graphics and a "gimmick" for starting the race, ranging from tobogan runs to catapults and water chutes. The graphics are not as detailed as, say, DethKarz, but the gameplay more than makes up for it. If you love games like POD and WipeOut, this obscure game from ARC/MicroProse will entertain you for hours on end, especially in multiplayer mode. 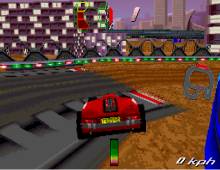