Necrodome is an excellent futuristic sport game that is ranks among Raven Software's most underrated titles. The description on the game's official page says it all about what makes the game original, and how it influences Raven's future games:

"Necrodome puts players into a heavily armored vehicle, fighting in tournaments in cities across a near-future United States. Originally slated to be a sequel to CyClones, Necrodome took on new life as a wholly original game concept with a brand new in-house game engine capable of handling multiple wall angles, slopes, bridges and buildings with multiple floors.

Necrodome pioneered a unique cooperative multiplayer experience that allowed players to work together in combat with one player serving as the driver while the other fired the vehicle's weapons from the turret. This type of gameplay, perhaps the first truly cooperative game mode in an action game, has never been replicated.

Originally slated as a DOS title, Necrodome paved the way for Raven Software's first foray into the world of Windows game development. It also gave our developers the opportunity to learn and continue molding its in-house technology efforts and experience with 3D engines and networking for Raven Software's next 3D technology, the Vampire engine, used in MageSlayer and Take No Prisoners." Highly recommended, especially for its unique co-op multiplayer gameplay. If you like DOOM, Rocket Jockey, or both, you will enjoy Necrodome, a game in which Raven once again proved themselves master of the action/FPS genre. 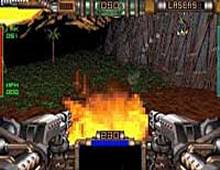 People who downloaded this game have also downloaded:
Magic: The Gathering, KKnD Xtreme, House of the Dead 2, The