Definitely one of the best futuristic racing games ever made, Wipeout XL not only once again cements Psygnosis' reputation as the powerhouse of action genre, but also introduces many novelties to the genre. The game takes place 97 years after the events of the original Wipeout, when improvements on Anti-Gravity Ballistic Racing technology have enabled sleeker and more maneuverable hovercrafts. You know the drill: blast down futuristic raceways, hit speed-up icons, pick up different weapons, and lay waste to whoever might stand in your way. But even if you've seen it all before, Wipeout XL is still a fun, incredibly addictive racer you'll want to play more than once.

While the original game's graphics are inferior to the better-selling Playstation version, Wipeout XL takes advantage of 3D accelerators to produce one of the best-looking games on the PC (although it probably doesn't support all modern 3D cards released after 1996). With all the graphic effects turned on, the game is simply breathtaking -- with transparent vapor trails spewing from the sterns of opposing ships, subtle colored light-source shading, and bilinear filtering. DirectX mode for people like me who don't have a 3D card is still very pretty, although of course not on par with 3D accelerated mode.

Graphics aside, it's the game that counts, and here Wipeout XL delivers plenty of satisfying destructive mayhem. The game is much more difficult and realistic than Wipeout. Whereas you can easily blow up your opponents in the original game with a well-placed missile or two, this time around all vehicles sustain damage first before they spectacularly explode. The selection of weapons has been expanded, and ranges from proximity mines to track-shredding earthquake bombs. If your energy is running low, just fly through one of the pit stops and you?ll be back in one piece. You can even turn the weapons off altogether if you prefer more pure racing.

The only bad thing you can level about this game is the disappointing lack of network play, so you can't blast your best friends on-line. Other than this obvious oversight, though, just about everything else in Wipeout XL makes it a great game that will hold your interest until the wee hours. 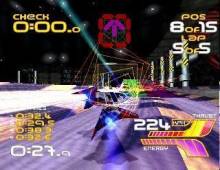