Rollcage is a fun futuristic racer from Attention to Detail (ATD), a short-lived UK developer. Published by Psygnosis in 1999, the game did not sell very well despite introducing a number of cool features to the genre at that time, including cool weapons (wormholes are my favorite), the ability to defy gravity, and innovative power-ups. The review at GameSpot explains the pros and cons rather well:

"This isn't the first racing game that puts you behind the wheel of an armed vehicle, but Rollcage stands apart from the pack in several ways. Most racing games - even ones where you're shooting at other drivers - put a premium on keeping your car on the track as much as possible. In Rollcage, on the other hand, you can not only bounce and flip and always land wheel-side down, but you also can drive along walls and even on tunnel ceilings. You might wonder just why you'd bother doing that, but sometimes it's the best way to pass an opponent, as well as the only way to grab certain power-ups. Then there's the whole notion of collisions. Sure, they slow you down, but hit the right object - a column supporting a building, for instance - and you'll be long gone as your opponent either gets buried in debris or runs smack-dab into a smoking heap of rubble.

Of course, you might prefer a more direct approach to slowing down your opponents, and that's where the power-ups scattered around each track come into play. Homing missiles automatically target the weakest part of structures, letting you bring the walls tumbling down without slowing your own car down; you can also target a vehicle in front of you and flip it out of control. The time warp slows down every car on the track except yours; leader missiles take out - you guessed it - the lead car; the driller bores through almost everything in its path; an ice sheet makes opponents lose nearly all their traction; and the wormhole lets you leapfrog past the car directly in front of you. And power-ups aren't limited to offensive weapons, either. Turbo boosts your speed until the scenery is just a blur, and the shield protects you from enemy weapons and decreases the chance of spinouts after collisions.

Just like in Motorhead, the relatively humdrum car graphics in Rollcage are more than compensated for by wonderfully detailed trackside scenery - assuming you've got time to admire your surroundings while driving at breakneck speeds, that is. Vast cityscapes, barren volcanic wastelands, lush islands, and busy industrial sites are the sorts of settings you'll be racing on, and with the exception of some fairly cruddy 2D trees (common to nearly all arcade racers), the graphics work is top-notch. Even more visually impressive than the scenery are the weapons effects. Use the time warp, and the entire display begins to undulate and sway in a psychedelic haze; fire the leader missile, and you'll see brilliant trails of flames as it screams just above the track in search of the front-runner. My fave? The wormhole - it slowly advances on the car in front of you before engulfing it and removing it from your path.

You'll find all the usual race options here: League competition is the Rollcage equivalent of a season; arcade lets you race on almost all the game's 20 tracks; and time attack lets you try to top your own best lap times. A welcome feature is the inclusion of multiple difficulty levels; it takes considerable practice to learn how to handle a car that can drive upside down on a ceiling, but even the newest of newbies can compete on the game's easy setting.

Even on the easy setting, though, you'll run into one of the game's few drawbacks: You can get bashed around so much that sometimes you'll just want to throw up your hands in defeat. Picture driving bumper cars at 350kph, and you've got a notion of just how disorientating the smash-bang action in Rollcage can be. Practice can help you avoid some of the show-stopping collisions, but even the best drivers can fall victim to multiple collisions and find themselves out of the running - unless they manage to lay their hands on a mighty power-up like the time warp or leader missile, that is, and even those probably won't take you from last to first if you're running at the highest difficulty setting. "

Rollcage is not a revolutionary game, but ATD deserves kudos for introducing a new kind of racing experience. After all, how many racers let you destroy obstacles and drive on walls and ceilings? It may not be as addictive as classics of the genre, but it is far better than average. Highly recommended! 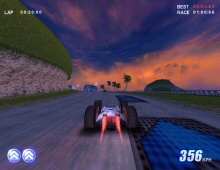