Moto Racer is the first title in a relatively successful series Delphine developed for Electronic Arts. This 3D arcade motorcycle racer allows you to ride superbikes and motocross. Race Time Attack, Single Race, and Chanpionship Circuit are available in both "motocross" and "superbike" modes.

Although it's not meant to be a realistic racing simulation (and indeed it was always billed as an "arcade" racer), Moto Racer's physics engine is still more than reasonably realistic. The feeling of sheer speed you get when playing the game is palpable. From fishtailing around corners, to slipping around on the snow and flying through tunnels, the feel is what makes Moto Racer a lot of fun to play.

Similar to many racing games, there are only a few basic keys/buttons you need to know: gas, brake, turn, and boost (turbo) which makes the bike "pop a wheelie". Moto Racer offers 8 courses, half of which are designed for superbikes and half for motocross. There are also 8 different bikes to choose from, each varying in acceleration, maximum speed, grip, and brakes. If you can manage to finish in the top 3 in all the courses, you can then race them in reverse mode. After beating all the courses in reverse mode, you will get to race in a very amusing pocket bike mode (i.e. little bikes driven by adults). The courses are nicely varied, with good detail on background scenery.

Expert racers will probably find Moto Racer too easy and too unrealistic, since the only way to crash a bike is to run into a wall while doing a wheelie or while in a jump. But it should still take even the most hardened racer quite a few hours to make it through to the pocket bike mode - and the game's highly detailed 3D graphics helps maintain interest. Although it's not incredibly realistic, the fast physics engine, nice graphics and simple gameplay make Moto Racer one addictive game you'll likely come back to time and again. Highly recommended. 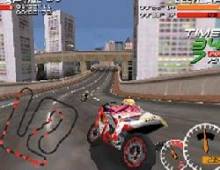