Road Rash is one of the rare gems that play much better than it looks. Although very dated when released, the game's simple charm attracted a small but loyal following. While the game may sound like a 'realistic' motorcycle racing game (Motocross comes to mind) - especially with Papyrus' name behind it, it is actually an arcade-style game that pays little attention to real-world physics. Not that it's a bad thing at all - even die-hard racing fans will have a blast driving up the wrong lane, slamming into passing cars, and beating cops around with an iron bar.

Let's get the bad stuff out of the way first. The graphics, by 1996 standards, is dismal. It's laughably bad, and inexplicably so considering how Papyrus' NASCAR Racing series looked at that time. Very few things are drawn to scale, the background scenery looks like discarded Hollywood cardboard sets, and the riders, cars, and pedestrians are all very pixellated. The music is also horrible - you will most likely turn it off after the first few tunes (luckily you won't have to hear it, since this CD-rip is missing the music to save space). And I have already mentioned the lack of real-world physics, but that's a design choice rather than a flaw.

Now, let's talk about the good stuff, of which Road Rash has plenty. First, although it may be an arcade-style game with little realism, Road Rash offers more than a few ways to steer the bike. You can perform a lean, a fast steer, and slow steer, and use three ways to attack fellow riders and cops: kick, punch, and swing. And you will need to learn those attacks quickly, because things get nasty in a violent-but-so-much-fun Carmageddon kind of way. The premise of the game is that you take part in a series of illegal races on roads across the USA. This means it's a free for all once you hit the road. If you don't have a weapon, you can even grab one off the other racers if you are quick enough. Naturally, since the races are illegal, you will have to avoid or fight cops who will show up on your tail. Another feature of illegal races is that nobody cordons off the streets to block traffic for the racers, so you will have to avoid hitting pedestrians or run into cars along the way. One nice touch I really like is that if you slam into a car hard enough, the impact will launch you from your bike several feets up the road, and you will have to wait while your on-screen persona gets up and runs back to where the bike was.

Your goal is to win as many races as possible (duh). In the process, you will earn prize money that can be spent on buying new, more powerful bikes. The "Super Bike" is my favorite, since it comes with a 'nitro' booster that can boost your speed up to 10 times in each race. Another nice touch is that all the bikes handle differently, so it takes some time to learn how to handle a new bike properly.

Despite outdated graphics Road Rash excels in every other department. It is a blast to play, and will keep even the most die-hard racing fans glued to the screen. Whether you have a passing interest in racing, street racing, or if you're just looking for a fun arcade fix, Road Rash is well worth your time. 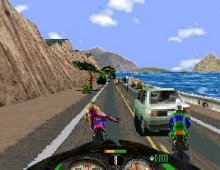