Moto Extreme is a so-so motocross game from Artech that pales beside Road Rash and Moto Racer, although admittedly Moto Extreme tries to be a different kind of game. While Moto Racer is a "real life" motocross racing game, Moto Extreme takes a Carmageddon approach: you can punch or kick your opponents off their bikes along the way. In fact, you will be forced to do that before they do the same thing to you.

Moto Extreme gives you 8 fun off-road courses spanning the globe, plus a secre lunar course you have to discover. You can select from 3 different bikes for each race, with the usual variability in speed and maneuverability. You can also configure a number of settings, such as window style, the amount of roadside objects and visible distance on the track.

One of the best things about the game is the variety of terrain. You will have to negotiate icy patches, snow, oil slicks, water or treacherous desert sands. Although it is an arcade-oriented game, Moto Extreme implements a number of real-world features, such as brakes and the ability to shift your weight forward and backward on the bike - crucial for those slippery slope. The game also includes a two-player mode, which lets two players race on the same computer.

Fans of Carmageddon will feel right at home with Moto Extreme. You not only can punch and kick your opponents, but even jump on their helmets (!) from behind. Even if you are not successful, you are bound to get a couple of good laughs. Unfortunately, user controls leave much to be desired, and bike handling is not as smooth or as realistic as it should be. The worst thing is the almost nonexistent challenge: although you can choose from 3 different skill levels (amateur, expert, and pro), the game is quite easy even on pro level - all you need to do is keep swaying from side to side and accelerate as often as you can. This shatters any illusion of challenge, and make the game more boring than fun. Yet another example of a game that starts with a neat concept, but fails in its execution. Play Road Rash instead of this mediocre game. 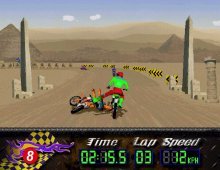