International Moto X is a nice motorcycle racing game from Graftgold that is relatively obscure on PC, although the Playstation sold considerably better. The game offers standard options racing fans are familiar with: 3 modes of play (practice, time trial, and competition), bike upgrades which cost money (e.g. engine, tyre, gear type and so on), and dozens of courses to race on. The game can only be played from behind-the-rider third person perspective, but you have the ability to zoom out and view the action from a bird's eye view. Bike handling is reasonably realistic, although for some reason I never see my rider fall down from his bike no matter how bad I steer him ;) Graftgold deserves kudos for including a huge number of courses -- over 50 in all spanning across 4 continents.

What sets International Moto X apart from most similar games is the built-in course and competition editors. The course editor allows you to create a new course from scratch, while the competition editor allows you to create a new tournament by setting the prize levels and choosing courses to include in the tournament. These two extra options add considerable longevity to what is already a solid game with long-term play value. Too bad most courses lack the details that would make them distinctive, and the underlying physics model is not as realistic as Dynamix' venerable Motocross. 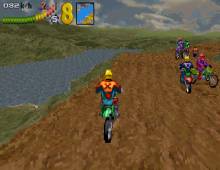