One of the last games published by Gremlin before they were bought out, Motorhead is an excellent racing game developed by Digital Illusions that deserves a much longer shelf life than it received. Trixter's description and review at MobyGames says it all about this game:

"Motorhead is a racing game set in the near future. Despite its semi-futuristic setting, the cars require realistic handling. There are 10 different cars and 8 different tracks. You don't get them all at once however, you have to earn them by winning championships in the Transatlantic Speed League.

Motorheadis the nearly-perfect embodiment of beauty, speed, style, and form in a racing game. The handling is fairly true-to-life (or, at least, as true-to-life as racing 20 years in the future would be), with firm suspension and realistic tire grip.

Display: The display engine is not only fast has almost no scenery pop-up whatsoever. If you're lucky enough to own a 3D accelerator, especially one that supports 32-bit color rendering, the distant scenery flows onto the screen smoother than butter.

Music: From a demomusic veteran, the music ranges from light and airy to urgent and insistent. While some music tracks are weak, there are none that are bad.

The "easy" difficulty level is too easy. The medium level is hard. The hard level is insane. Unless you're a veteran of PC racing, the game will appear quite difficult to you. The control of the cars is misleading at first; the setting is futuristic, which implies arcade-like handling and control of your vehicle, but the handling, suspension, etc. are close to "normal" for sports cars. It takes getting used to.

If you're good at racing games and want a strong challenge, check this out. And if you don't have a 3D accelerator card, buy a 32-bit color rendering card like the Viper V550 (TNT-based) so you can get the 32-bit color version with the gorgeous rendering." If you like racing games, Motorhead is simply a must-have. 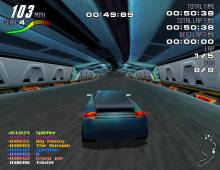