Total Football Management (known as Bundesliga Manager 97 in Germany) is the sixth entry in Software 2000's long line of excellent football management games that started with The Manager in 1992. As with other entries in this series, TFM shines with a staggering amount of detail and options. You are in control of all the facet of a football club, including players, tactics, training, transfer, contracts, merchandising, stadium construction and development, promotions, and all the other aspects of the sport you can think of. The statistics alone is astounding: the game keeps track of top scorer lists and numerous other play statistics for each team, and you can even choose to view the tables in absolute or relative terms. This extensive record-keeping provides for a very high long-term play value, and will keep you coming back for more.

Thanks to official license from football associations, TFM features authentic team logos and player statistics. Although most of the game is static (i.e. screen after screen of spreadsheet-like menus and charts), the actual action on the pitch is rendered with excellent 3D graphics in real time with multiple camera angles, although the graphics is disappointingly poor compared to other games of the same period (the 1997 version of FIFA Soccer for example). Fortunately, this weakness does not hurt the appeal of the overall game too much, since TFM is definitely not an action-oriented game. Besides, you can choose to view only match highlights if you are not interested in 3D pizzazz.

The predecessor to TFM, Football Limited (Bundesliga Manager Hattrick in German) was accused of not being very accessible to beginners. TFM corrects that problem by offering excellent tips and advice throughout the game, as well as making the user interface much more intuitive and customizable. You can re-map menus to the function keys, so for example you can map "player list" with "F1" key. The gameplay depth is as deep as Football Limited, only there seems to be less micro-management. You can assign specific training routines to individual players, plan tactics for the next game by studying the opposition?s league record, and deal with the press in post-match interviews. The excellent "Game Editor" lets you change the extent of involvement you want. If you would rather concentrate on coaching aspects, you can leave club finances to the club's board of directors.

If you are even remotely interested in football management, Total Football Management is well worth your time. It may not be as popular or extensive as the venerable Championship Manager series (the club finances are in fact deeper and more realistic), but it is deep enough to deserve a permanent place on your hard drive. 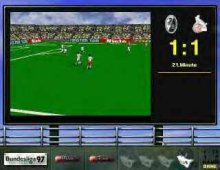