A nice entry in Micro League's short-lived "Time Out Sports" series, designed to provide bite-sized sporting entertainment for short coffee breaks between your spreadsheet or word processing. TOS Basketball is a simple and fun look at the sport of basketball via five quick, easy-to play basketball games that let you compete against a friend or a computer player. The mini-games are diverse, although some are more creative than others: Horse: kind of like a basketball version of "Hangman", lets you match your shooting skills against the computer or a human opponent. You must challenge your opponent to make a certain type of shot -- if he succeeds, you lose that challenge and receive one letter from the word "HORSE", or vice versa. The first player unlucky enough to collect all the letters spelling "HORSE" is the loser. The object here is to be "in control" the entire gameAround the World: the court is marked off at seven points around the net. Players take turns shooting from each of these marks, from right to left and then back again, hence the name "around the world". At each mark, the player must take a shot -- if he makes it, he is able to continue on to the next mark. He keeps going until a shot is missed -- at that point, he can call "Chance" and try again. If he makes the "Chance" shot, he continues on to the next mark -- if not, he must start at the beginning (right-most marker) again. If he chooses not to "chance" the shot, he must begin his journey at the spot where he last missed. Two players compete. The first one to go "around the world" in less turns than his opponent wins.3 Point Competition: the most straightforward mini-game. The goal here is to sink as many three-point shots as possible, under a limitation of 25 balls or 60 seconds, whichever comes first. Five basketball racks are placed on the court around the 3-point line. Beginning at the right baseline rack, you must shoot the balls from each rack, moving clockwise around the court. Hot Shot Competition: Another straightforward game. The goal here is to score as many points as possible within 30 seconds.You may only shoot from the colored circles marking the court -- each has a defined point value.The farther the circle is from the net, the higher the point value.Sweat Boy Competition: the most unique (and IMO fun) mini-game, this game makes you the "sweat boy" of the basketball court. Your goal is to wipe the floor dry during a basketball game. However, unlike the pros, you must do your job during a game of basketball. You gain points for each sweat spot you clean, but you must be quick to get back to your position under the net before the players return, because if a player collides with you you lose a life. You also lose a life if a player slips on a spot you missed.

Controls are mouse-driven, and very intuitive. Graphics are crisp in SVGA, and there are three different difficulty levels to choose from. You can even play a random game, and the game records your high scores. Overall, TOS Basketball is one of the most unique and innovative sports games ever made, offering a refreshing angle that unfortunately no modern developer has followed. 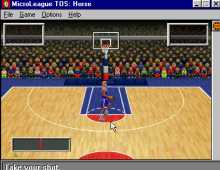