Super Speed is a 2D racing game, and it`s hard to control it and i`d better tell you the buttons because if I wouldn`t then you would probably get mad at me: "Z"- steer left, "X"- steer right, and push "Shift" to accelerate! Once you understand (or learn by heart) where and when you need to turn, the game becomes boring.

Super Speed is nice little top-down racer that pays homage to Indy 500, an old arcade racing game. Like its spiritual predecessor, Super Speed allows up to 4 players to race around a curvy track, performing wild spins in trying to reach the finish line first. Though the graphics aren't as sharp as the old arcade game, it nonetheless looks pretty close to the original, and includes all the familiar game components such as the maps and the way the car handles. You can collect wrenches, which in turn would be traded into the garage for adding traction, speed, acceleration or points.

Played from the same top down perspective, tracks would have hazards such as oil slicks, dirt mounds, puddles of water and also tornadoes that would roam around the tracks. Slamming into the cars and side of the tracks constantly will eventually result in blowing up your car. But not to worry as the familiar helicopter will swoop on by and get you going on your way.

The game was released as shareware, with six additional tracks included in the full version (downloadable here). Overall, Super Speed is a fun, albeit simple racing game that is well worth a look. It may not be the next Micro Machines, but for a few minutes of good ol' racing fun with friends, Super Speed is more than adequate. 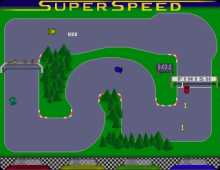