A freeware racing gem which deserves recognition and playing, Turbo Sliders offers a solid netplay code, and with a built-in server list, finding a race or setting up your own is not that difficult. Racing these small piles of pixels with 10+ other drivers is a thrill - it's what we all have been, at least subconsciously, dreaming of when playing Slicks 'n' Slide or GeneRally. On top of that, Turbo Sliders delivers wonderful playability. And that's all we need.

The driving model is apparently very flexible, and choosing a different car makes the game play quite differently. Actually driving probably, at first, has an unfamiliar feel to it. Key to this is, that the playability has been designed around grip. And great versatility is achieved. Don't expect Grand Prix Legends though, it's still a simple overhead arcade racing game, easy to learn, but hard to master. The developer had the original, ancient versions of Slicks 'n' Slide in mind, and, as the name Turbo Sliders implies, this means sliding around the track a lot. Think hovercraft; the cars feel a little like they had the inertia of the spaceship from Asteroids. The vehicles all have their own takes on the grip issue, and all make for very different driving styles and driving lines. For instance, the F1 car really grabs onto the ground and zooming around in great speeds is really fun and challenging, as when you push it too far, you'll be sailing across the track with no control.

The game comes with four different vehicles, and since it's relatively easy to modify them, there are a bunch of third-party additions for your garage. The host can define a set of cars for the players to choose from, but it's usually sensible for all drive the same sort.

The graphics (and sounds for that matter) are quite spartan, but if you're a fan of the ole Super Sprint, you can consider them retro. It's again the playability that counts, and this definitely includes the very well implemented netplay. It's simply so much fun. 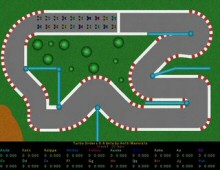