Supercars is a fun top-down racing game stylistically reminiscent of - and probably influenced by - Super Sprint series. Designed by a talented group of programmers who later produced the Lotus series of games (only the last of which was released for PC), Supercars "... is set in a pseudo-fantasy world with fictitious cars battling for championship supremacy on a spine chilling and perilous circuit in the middle of a desert viewed from overhead. Each track consists of tortuous turns, straights, tunnels and bends which become progressively more perilous as you speed your way through the levels. Other hazards include mud, water and oil which have a variety of effects on the speeding cars. As you progress through the game, the number of opponents you race against and the on-track hazards increase at an alarming and unnerving rate.." (from the manual).

There are 9 tracks in the game which can be raced in any order (although I find the last one much more difficult than the rest, so you should race them in order anyway ;)). Money you win from the races can be spent on the usual car upgrades, such as steering and turbos, as well as front and rear missiles you can use to destroy opponents' car (which will leave a big pileup for other cars - and yourself on your next lap). The scores you earn from each race are cumulative - they determine your overall championship standing against computer-controlled drivers.

The game boasts decent graphics, fun gameplay, and semi-realism (you can apply the 'hand brake' for example during fast turns, and scids have a real impact on the cars. One interesting idea is the trivia section between races, in which you must answer questions to win championship points and money. Wrong answers can cost you either or both. All in all, a highly underrated game that was much better known on the Amiga. Recommended! 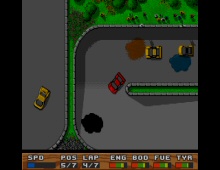