SubLOGIC Football is an oldie American football game developed by Quest Inc. and published by subLOGIC in 1984. The game is very primitive even by 1984 standards. There is only a few teams you can control and a few coaching options, and the action on the gridiron is confusing and hard to follow. Poor graphics is primarily due to crude animations of CGA players; text-only ASCII characters (such as the ones in XOR's Pro Challenge) would make the action much easier to see. There is no reason anyone should play, let alone enjoy, this marginal game that simply cannot stand the test of time - except perhaps die-hard football fans or rabid collectors like yours truly ;) 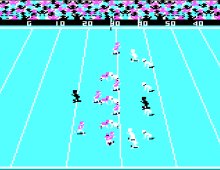