Rage's first entry in the Striker series is an ambitious soccer game that boasts smooth graphics, but with no element of excitement. Gets the red card for lack of playability.

In short, Striker is a footie game from the arcade action school of thought a la Sensible Soccer: heavy on speed and frantic play, low on realism. Unfortunately, poor controls and blocky graphics make it much less fun than the Sensible Software classic. What you end up with is a soccer game that's fast and slick, but nowhere near as much fun as it could have been. Fortunately Rage would improve both gameplay and graphics over time, and Striker '95 is quite a big improvement over this lackluster first release. 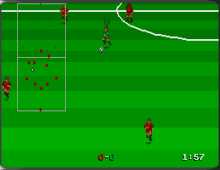