Striker '95 is an above-average soccer game that features some of the best graphics for its time. Similar to Actua Soccer by Gremlin, Striker '95 features a true 3D environment, with rotoscoped player animations for realistic movements. Different stadiums are included with a variety of playing surfaces. The game boasts over 5,000 players, each with his own statistics, from over 50 national and international teams. The players' statistics don't seem to affect the gameplay that much, though-- only some very minor effects. For instance, players who have low stamina level will tire quicker, and so they will run slower than others. Gameplay is decent, although computer AI leaves much to be desired-- sometimes the computer will send all of its players on offense, leaving nobody to mark my deadly forward. This makes most matches far too easy.

The stadium atmosphere is good, as it's rendered with a wide array of sounds, from cheers to songs and noises sampled directly from real games. The CD-ROM version (not the one here, unfortunately) features good commentaries from Andy Gray (a famous UK commentator) in different languages (English, French and German). Overall, an above-average soccer game that pays much more attention on graphics than gameplay. If you like easy soccer games with great graphics, this one might fit the bill, although the controls take some getting used to. 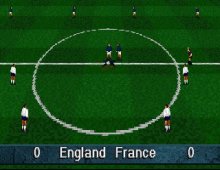