Scorcher is an innovative racer that combines elements of WipeOut and Marble Madness with mixed results. Although the game has many outstanding 3D race courses that are very imaginative and fun to drive on, it doesn't offer enough features to maintain interest after you have tried every course.

The game's storyline is virtually nonexistent, so it suffices to say that you drive "Scorcher," a futuristic speed bike, competing with others on various courses. You can use turbo-boost to accelerate and jump, but other than that the bikes don't handle much differently from 20th century bikes.

All of the game's six tracks are very well-designed, and are a lot of fun to navigate through. The problem is, there is little else to keep you playing after you have played all of them. The game has no multiplayer modes or level designer. It doesn't even have weapons to spice things up. So you'll enjoy the game for as long as it takes to finish the tracks and getting used to the initial challenge of controlling a futuristic bike. After that, you'll probably go back to the tracks in WipeOut. Scorcher is fun for a while - too bad it's only for a short while. If you liked Megarace, you'll probably enjoy this old game for as long as it will last, though. 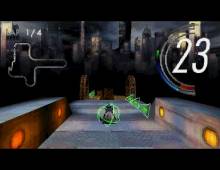 People who downloaded this game have also downloaded:
Re-Volt, Lemmings Chronicles, The (a.k.a. All New World of Lemmings), Wipeout XL (a.k.a. Wipeout 2097), SuperKarts, KKnD Xtreme