Although many games have suffered due to advancing years, few have fared worse than early polygon-based games. Even in EGA, Tynesoft's Roller Coaster Rumbler looks bland and insipid. The sparing use of color (probably to aid framerate) ensures that this game will age even more gracelessly than its triangulated contemporaries. BUT (and this is the important point), this game is a riot to play. If you don't mind a bit of ropey presentation, read on.

RCR places you in the A-10 of rollercoaster carts, hurtling you round an extensive, complicated and hazardous track built in the middle of nothing and nowhere. Back in '89 people apparently didn't need an excuse. On your journey you will encounter the standard slew of health powerups and ammo pickups, stationary targets, the occasional obstacle on the track and a great many UFOs (which you should shoot, if you hadn't guessed). Miss too many targets or take too much damage from obstacles and your cart will leave the rails completely and go spinning off into the void. Control is limited to aiming and firing the nose-mounted cannon (steering not being a consideration). As the game progresses, targets get faster, your cart gets faster, and pickups become thinner on the ground, and although the game doesn't appear to have a conclusion, in two player mode things can become fiercely competitive. Looking at this game, the heritage of such CD-only titles as Sewer Shark and Rebel Assault is clear. And, like the aforementioned titles, RCR is a very enjoyable short-term shooter. 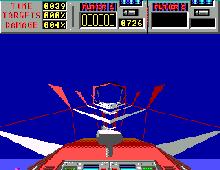 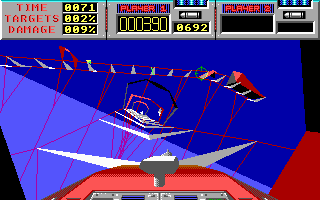