One of the most loved arcade games, Pole Position is a watershed in arcade racing games and was THE game that set standard for all subsequent "checkpoint racers" (i.e. racing through checkpoints against the clock). Designed by Japan's NAMCO and licensed by Atari in the US, the game's launch in 1982 attracted countless arcade fans.

This rare PC version by NAMCO unfortunately won't give you the same feeling as the semi-authentic steering wheel and gas pedal setup of the arcade version, but it nevertheless remains a fun and addictive game. Although naturally the game's 4-color CGA palette pales in comparison to vibrant colors of the arcade version (which you can find to run on MAME emulator by searching the web), many of the game's innovations carry over to the PC version, back when black-and-white wireframe graphics were still the norm. Scalable foreground objects, detailed graphics including the sky and scenery, and very smooth gameplay are all the hallmarks that make Pole Position one of the true classics.

Even without the steering wheel and gas pedal, Pole Position for PC remains as challenging as it was in the arcades. It takes a lot of finesse and practice to find a good balance between speed and control, while you try not to smash into billboards along the roadside. The game is not too difficult, though - some practice should be enough for even novices to qualify for the big race.

NAMCO certainly made the best out of PC's capabilities in 1983 with Pole Position. Even without the convincing colors, sounds and realistic setup of the arcade version, this PC version offers the same excellent gameplay and crisp graphics that stand the test of time quite well. It's much better than the vast majority of other PC racing games at that time, and a true pioneer in its genre. If you like racing games, here's one pedigree you shouldn't miss. 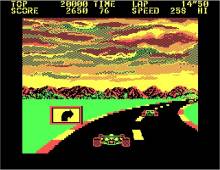 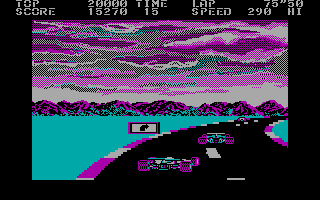