Micro League Football Deluxe Edition is another solid football simulation that follows Micro League's notoriety of giving their games confusing names. This is actually version 1.5 of the Micro League Football engine, with identical graphics (EGA) to the first release, but with many enhancements including an expanded stat compiler, single-key play calling macros, quick-play and quick-season options, new league play utilities, "real sound" (which enables digitized sounds via PC speaker, similar to Access' Mean Streets), stronger AI, and much more expanded playbook. There are also 12 new player ratings to please fans of football stats everywhere. Overall, another outstanding classic sim that will delight fans of the sport. For a more detailed description of the engine, here's Hugh's original reviews for Micro League Football 1 and 2:

"Micro League Football is one of the true old games in the sports genre. The game is very easy to play because of the easy menu interface and a very good use of the mouse. Even with it's clunky graphics, game play was very easy and the play calling and execution was very realistic. You are given a selection of past power house teams such as the 1960 Green Bay Packers, The 1984 49ers, the 1960 Eagles, etc. And with data disks that could be purchased separately, you could create leagues of any teams that you had stats for and play season schedules for, and dump your stats to the printer.

Play is based on the abilities of real players so that if you had the 49ers you could let Montana pick a team apart with his deadly passing game, or if Cleveland was your team, Jim Brown could grind a team into submission with his power running. You can pick stadium, weather conditions and substitutes from your bench. Injuries, fatigue, weather conditions, and home field advantage factor heavily into the game. If you are really lazy you can set each coach to computer control and sit back and just watch the game. This is a very good game for its day. Microleague Football 2 updates the graphics to VGA and you get many different sound card choices. I rate them both a 4 out 5. Must haves if you like to collect football games." 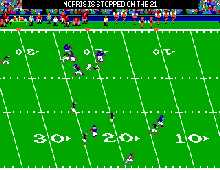