One of the most original futuristic sport games ever made, Rocket Jockey is undoubtedly the best game Rocket Science produced in their short career as game developer. Unfortunately, its very steep hardware requirements (at the time) and Segasoft?s failure to deliver the promised LAN patch by the game?s release date seriously hurt the game's sales and helps make it -- until today, that is -- an undiscovered gem.

The game's concept is very unique, and instantly appealing: as the title implies, you ride rockets (yes, real rockets) and face off against other rocket jockeys in three different (and all entertaining) types of competition. As CGW review points out: ?there's Rocket Race, an obstacle course emphasizing piloting skills; Rocket War, a gladiatorial free-for-all; and Rocket Ball, a demented soccer game where jockeys use their cables to hurl various balls into goals. Tight time limits and point spreads ensure that gameplay never drops below an appropriate level of mayhem.

Along with dizzying speed and gleeful brutality, this game sports some devious arena design, with one new twist or obstacle in each successive arena. For example, just when you've gotten the hang of flinging tires and wrecking balls in Rocket Ball, Proximity Park asks you to score goals with cycle-blasting proximity bombs. And one Rocket War arena makes getting, and bashing, your opponents particularly daunting by carving up the playing area in quarters with only narrow passageways between them.

If there's a knock against the gameplay in Rocket Jockey, it's that some of the arenas can be very unforgiving. Failure to score within the first 30 seconds of some Rocket Ball stadiums can doom you to failure, while some Rocket Race courses demand nothing less than cycle-piloting perfection.

There is something else about Rocket Jockey: It has the coolest music in a game ever (which is unfortunately ripped out in this download version), featuring the fat-stringed sound of surf guitar legend Dick Dale (he's the Pulp Fiction guy). The psychotic toreador riffs and manic drums complement the action perfectly.? 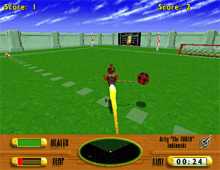