One of the last games produced by Flair, Race Mania is a fun offroad racing game that plays like a cross between Micro Machines and Flair's own Rally Championship, except it is not as fun as either game. The game lets you choose from a variety of generic off-road vehicles, each with its own strengths and weaknesses (e.g. more durable than average, but at the expense of speed). The emphasis here is on playability over realism, as the cars you drive look like miniature versions of the real thing, and courses are all set in fantasy world. That doesn't mean the game completely ignores realism, though: you will feel more friction on some courses than the rest, see your car recoil from the impact of bumping into someone else, and see the effects of acceleration over long jumps. The action is fast, furious, and highlights are up to Flair's usual standards, i.e. very fluid animations and user-friendly controls. Unfortunately, the courses are too similar to one another and there are not enough "bonus items" (like in Death Rally) to keep gameplay interesting for the long term. Well worth a look if you are a fan of Micro Machines or arcade-style rally games in general, though. 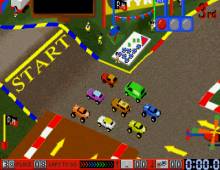