Rally Championship is a decent rally racing sim from Inside Team, published by Flair in 1994. The game's strengths lie more in the excellent choice of cars and racing locales than actual car physics. The goal is simple: race in courses around the world for prize money, which you can use to buy more pricey cars. The cars you can drive are all top-of-the-line, including the Porsche RS, Peugot 205 Rally, Opel Calibra, Lancia Delta, Ford Escort Turbo, and the Toyota Celica. Rally courses range from snowy Scandinavia to the dusty East African savanna, bustling city streets of France, lush tropical rainforests, and even very narrow passes on the Alps. You can choose to race any single stage, or join a full World Series tournament. The courses are very well presented, and the cars are crisply animated in VGA. Variables such as different weather conditions (including rain, snow, fog, and even desert heat) are nicely rendered and have different effects in the game. Both daytime and nighttime conditions are included, so effectively you have twice the number of courses to try.

Gameplay in Rally Championship is decent, although it could be better. Damage and fuel gauges are present on-screen, and you have to strike a good balance between safe driving and making the best time?crash into roadblocks one too many times, and the damage gauge will go to the red, triggering the dreaded "your car has crashed" screen. Certain realistic factors are included, such as the ability to change tires to suit the road condition, and to upgrade to faster car.

Overall, though, I found that the cars in Rally Championship are a bit too easy to drive... they more or less "glide" along the roads, unlike cars in, say, Rally-Sport (a smaller but very entertaining freeware game, also on this site). Maybe that's just me, but die-hard rally fans would do well to treat this as a casual, "light" rally game rather than a full-fledged simulation of the sport. Worth a look, but probably not a must-have. 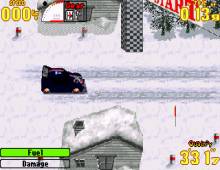