PRO Challenge is a fun, "light" version of XOR's celebrated NFL Challenge, one of the best American football simulations ever made. Instead of coaching a team through the entire season, PRO Challenge lets one or two players compete in one single match: the "All Stars" against the "All Pros" team.

Similar to NFL Challenge, the game is played in real time and is almost entirely text-based: most of your time will be spent watching the action top-down, tracking the red arrow (representing the ball) going back and force on the football field. When a play from the playbooks has been selected, though, the game will zoom in to the action so you can see how the play is being carried out. Here, "O"s and "X"s letters represent players on either side. Not ASCII, but still quite primitive graphics. Fortunately XOR's games are famous not for being pretty eye candies but for being excellent simulations, and their reputation is intact in PRO Challenge. The playbooks (both defense and offense) are extensive, and there is a good range of options for most actions in the game, including how you want to kick the ball. Because it's a simulation of only one game, anyone looking for a more comprehensive package should instead stick with NFL Challenge and FPS: Football. But if you just want a quick game of football played by the best players in the business, PRO Challenge more than fits the bill. Recommended! 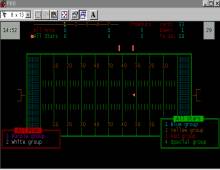