One of the earliest games by Dynamix programmers, GBA Championship Football is a solid text-based simulation of the gridiron sport. The goal is simple: pick a team from NFL's four geographic divisions and lead it to win over the opposing side, whether human or computer-controlled. The game's playbook is quite comprehensive for its age, and the strategy does affect the outcome of the game. Too bad there is no tournament or championship mode despite the game's title, making it good only as a quick beer-and-pretzel football fix instead of a comprehensive simulation. In all, a respectable effort for the time, although falls short of rivalling XOR's NFL Challenge, a much deeper and more sophisticated contemporary football simulation. 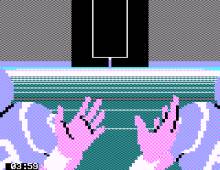