Armchair Quarterback is a decent free text-based simulation of American football. As the in-game description says, "...nearly all aspects of the sport are simulated or taken into account, including actual statistics of professional teams in the 1980s. The designer did make a serious attempt to provide the game with enough intelligence to make it a worthy opponent."

For its age and freeware status, Armchair Quarterback is a surprisingly fun and challenging simulation, even if it is somewhat limited. One nice touch is that the game plays in real-time - you have a limited number of seconds during each match to call plays, make substitutes, etc. For a quick and dirty game of football management, Armchair Quarterback more than fits the bill - although it is not as detailed as commercial titles released during the same period such as NFL Challenge. Recommended! 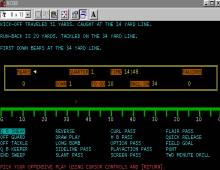 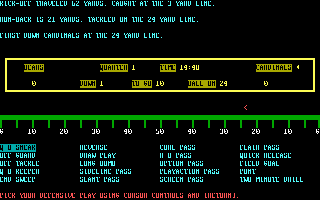