The Amazon Trail is a fun game in MECC's Trail series, of which The Oregon Trail is the best and most well-known game. MECC once again succeeds in combining education (in this case, facts about the Amazon rainforest and its inhabitants) with fun gameplay. Unfortunately, though, the game is too hard for all but the most patient of adventurers-- and definitely too hard for its target audience of 7-12 years old.

As in other Trail games, your primary objective in The Amazon Trail is to explore and survive in the harsh environment. Your goal here is to travel down the Amazon, searching for gifts to bring to the Inca King. You will have to stop in many cities along the great river, in which you have to trade with the locals, to get items that you will need. You will have to take photographs of the natural life along the Amazon periodically.

There are not many options, until you actually get someplace. Then you can trade with the locals, ask them for information, and decide where you are going to go next. When you are not stopped at an important location, you can keep sailing, go to the jungle for pictures, or fish in a difficult mini arcade game, full of obstacles such as logs, that will challenge even action game veterans. And if that's not frustrating enough, you can --and will-- die from a plethora of exotic diseases, often without knowing exactly why. Fortunately, the guide you choose early in the game provides a lot of helpful clues and advice-- too bad he/she can't help you with the mini arcade games.

Overall, The Amazon Trail is much more difficult than other games in the series. It's also much more linear-- you won't feel compelled to replay it after you've found all the secrets for the Inca King. Still, even without the great replay value of The Oregon Trail, The Amazon Trail is a solid edutainment title that's well worth a look-- if only to finish it just once. You'll at least learn a lot about Amazon tribes, flora and fauna in the process.

You will be told in a dream that the people living in the areas surrounding the Amazon River are endangered by Malaria and European explorers. You are then brought back in time, and will have to explore the Amazon. As in the other games in the Trail series, you will have to survive your trip in the areas surrounding the Amazon River. You will choose a guide at the start of the game and this guide will provide you with many useful information.

You will interact with people around the river and not all of them will be friendly. You can trade with them so that you can get the things that you need. You can also get valuable information from the people which you can use in the game. You will also take photos and try to identify the various flora and fauna that you will see as you go along your trip. There are also plenty of mini-quests to keep you interested in the game. You will need to find gifts that you can bring to the Inca King when you reach the hidden city.

There are enough challenges in the game but the best parts of the game will be when you get to a town and can get to interact with the people. One of the biggest challenges you will have to face in the game is the possibility of dying from diseases.

The graphics are mediocre and the story line is pretty linear but the game is still capable of providing enjoyment to gamers. Although the target market for the game is those in the grade school age, this game is better played by teens to adults because of the difficulty of the game. There is a tendency for young players to become frustrated with the game. 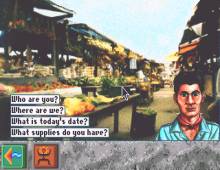