Powerslide, created by talented Australian developer Ratbag, is a post apocalyptic racer with heaping helpings of style, character and best of all, fun.

I think the official website describes the game best when it says "The year is 2020. After an environmental holocaust of devastating proportions, the population hovers slightly above the zero mark. The rich have fled to the underground, where they have formed corporate enclaves. Above ground the desolate cities and desert wastelands are inhabited by a feral population of freaks and survivors. With 98% of the population dead there's a lot of cars around just waiting to get driven into the ground. The ferals started the Powersliding competition, the corporates banned it."

The game oozes character and style, everything looking worn and aged, the prizes are even valuable fruit. The ferals in beatup, futuristic offroaders, the corporates in shiny new futuristic offroaders. Each of the cars has 1-4 drivers, each giving a different look for the car itself, all looking suitably beefy (ferals) or sleek (corporates).

Racing around anything from destroyed urban metropolises, complete with tattered skyscrapers, to futuristic underground cities to a small dam. All 12 tracks are varied and interesting, not just to look at but to drive on as well. Add to that the outstanding physics engine and you have a very fun, involving game that leaves you itching for just one more lap. If that wasn't enough, the multiplayer side has different play modes(fox and hound for instance) and good net code make it even more replayable!

As I mentioned before, Ratbag spent a lot of time researching the engine before even starting Powerslide. The result is a beautiful game with a great framerate, that goes triple if you have an openGL or D3D capable graphics accelerator.

Powerslide is an outstanding racer with great graphics, wonderful gameplay and piles of character, making it very easy to recommend to anyone. 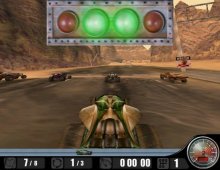