Ping Pong is a fun ping pong (more formally known as table tennis) game from Konami, released for the MSX computer in 1985 as well as for Commodore 64, Spectrum, and other 8-bit computers. A faithful translation of Konami?s arcade game of the same name, Ping Pong allows you to play a match against another human player or a computer player. The game abides to all the rules and regulations of table tennis, although some rules are abbreviated from the actual ping pong rules, probably to make the game more snappy. For example, instead of the 21-points rule in the real table tennis, in this computer version the first player to score 11 points wins. If there's a 10-10 tie, a tie-breaker system similar to tennis will be used to determine the winner (2 points ahead, up to 15 points total). Five levels of difficulty are available, ranging from slow to very fast ? the way expert players in Asia do it ;)

The game is viewed an isometric perspective, above and behind the base line of the table, with you controlling a ?disembodied hand? that holds the paddle. Although changing sides after the first game is mandatory in table tennis, you will always watch the action from this viewpoint (a good thing too, since playing the game from the opposite of the table would be very confusing). The score and other relevant information, including the judge's calls, is displayed on either side of the table. The audience appears on both sides of the screen, with the right hand crowd cheering on the computer or Player Two, whilst the spectators on the left are rooting for you.

As in real-life table tennis, timing and hitting a shot correctly is the key to winning, especially since the computer player in Ping Pong is no cakewalk. The interface is easy to learn and use, and even allows you to choose different kinds of shot. As the ball reaches the paddle, you select the type of shot you want by pressing either left, right, or up arrow key: pressing right when the ball hits the bat gives a cut, left a drive and up a smash (but you can unfortunately only smash when the ball is lobbed). The timing of the strike governs the direction in which the ball moves, veering to the left or right of the table. The bat is normally held forehand, but pressing the fire button switches to backhand mode allowing you to return a ball hit to the extreme right hand corner of the table. All of this may sound complicated, but once you get the hang of it, it becomes second nature quite easily and allows a good range of control.

Apart from the match points, players can collect points during the game and go for an entry on the high score table. Each time you hit the ball, ten points are added to your score, while a massive five hundred points can be collected by successfully smashing the ball and winning a game point. At the end of each level of play, a bonus of one thousand points is awarded to the winner for each game point of the winning margin. You must win two out of three games to win the match, as in real life.

Overall, Ping Pong is a very enjoyable ping pong game in this regrettably niche genre that sees very few computer titles. The game stands the test of time quite well, so table tennis fans should be happy enough with this timeless classic (especially if they are bored of the excellent freeware gem Cannon Smash). 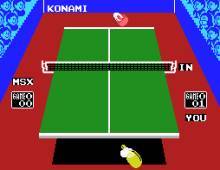