Peter Schmeichel Soccer Manager is a fairly primitive soccer management simulation of the English league. The relation with the Danish star is, as usual, just in the title and title pic. Choose your club, buy/sell players, build-up your team - the standard manager game. Nothing special and remembers me of the ancient soccer managers from the mid-80's on the C64, just with some graphics. 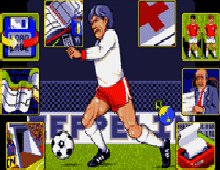