PC Rally is a below average shareware rally racing game from Spain's Digital Dreams Multimedia. The game lets you drive either a Toyota Celica or a Lancia Delta HF Integrale in 30 world championship circuits. The graphics are below average, the gameplay boring, the interface awkward, and car handling unsatisfactory: you will often feel like you are driving a two-dimensional paperdoll car that basically "glides" frictionlessly on the road. There is no feature in PC Rally that has not been done many times better by the likes of Rally Championship and other rally games. Recommended only if you are interested in racing games with a strong arcade feel and digitized car graphics. 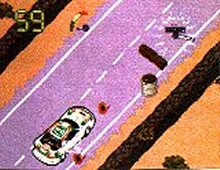