The last and arguably best in Titus' Crazy Cars series, Lamborghini - American Challenge is essentially the same game as Crazy Cars 3, except for the addition of a two-player mode and speed synchronization (so that slowdown programs, e.g. Mo'Slo, is no longer necessary to run on new computers). But that's not necessarily a bad thing, as Crazy Cars 3 is quite rightly hailed as one of the best racing games ever made, and Lamborghini does not disappoint.

Despite a lot of outcry in the Amiga community over the fact that the game is basically Crazy Cars 3 in new clothes, it's still a real gem of a game and certainly the best sprite-based racing game on the Amiga, and this PC conversion is excellent. The game is about illegal races that take place throughout America. Before each race, all racers place their bet on the outcome, and then try their best to win. You start the game with a Lamborghini Diablo with a modest amount of cash. You need to raise about $50,000 to get a chance at the next division.

Gameplay, which is what counts, is incredibly addictive. Car handling is great, and all the roads are well designed. Adding a realistic touch and another layer of challenge is the fact that not all the cars on the road are racing with you. Therefore, skillful maneuvering to avoid the slower cars is a must, because if you hit the back of a car it is quite hard to avoid it again, as you accelerate away and your damage increases. As you win races, they get longer, harder and more rewarding. The police are out to get anyone over the speed limit of 110km/h, and since you stand no chance of winning at that speed, evading cops becomes the order of the day. Fortunately, the shop contains exciting goodies for any would-be racer including speedups, turboboosters, police detectors, radar jammers and night-vision goggles-- most of which are ideal for evading the cops and gaining up on the race leaders. There are numerous realistic touches in the game that make it more challenging, such as rain and various obstacles that always slow you down.

There are a few weaknesses in an otherwise great game. First of all, the very high dollar requirement for promotion to the next division means that it's not worth continuing if you win a race, because you'll likely not be able to make that much money even if you win all the remaining races in that division. As if to rub it in, the game only allows save after you are promoted up division-- this means that you'll need to spend hours and hours racing the same races, being careful to win every single one. These nitpicks aside, though, Lamborghini is an incredibly addictive racing game that is much better than Gremlins' over-hyped Lotus series. It has more extras, better car handling, and the unmatched exhiliration of outracing the cops in the middle of the night, with your night vision goggles on. 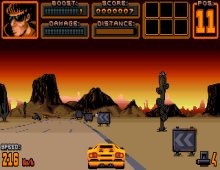 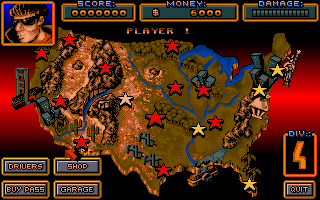