Nigel Mansell's World Championship is a disappointing racing game that starts out with a novel premise, then proceeds to ruin it by bad execution - same as what we have seen with countless other games. Endorsed by Nigel Mansell, one of the most famous Grand Prix drivers of all time, NMWC lets you compete in 16 different tracks spanning 16 countries.

As with all other F1 games, you have the standard options including tweaking your car, choosing your driver and nationality, and dealing with different weather conditions on the course. What sets NMWC from other games, though, is the "training" option, which lets you drive any of the tracks with Nigel Mansell himself as the coach. The problem is that this neat concept is not executed well at all. Instead of giving you helpful pointers, Nigel (who is represented by a disembodied head on screen) simply gives you canned words of wisdom seemingly at random, regardless of how well you are doing. Even when I drove my car off the road a few times, Nigel didn't say anything even remotely helpful. I got better eventually by just practicing a lot, but it would have been much nicer had Nigel's comments been more intelligent and situation-based. (as a comparison, Chuck Yeager's comments in EA's Advanced Flight Trainer are much more informative).

The graphics on the course are decent, but their drabness makes NMWC look more like a 1988 game than a 1992 one. The level of detail is nowhere near Accolade's Grand Prix Circuit, for example, and scenery graphics are very sparse. All in all, NMWC is a below-average racer whose only innovative feature (training with Nigel Mansell) is rendered useless by superficial implementation. 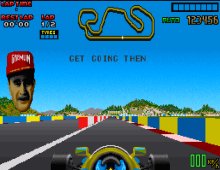