Probably the most obscure Loriciel game ever made, Paragliding (a.k.a. Paraplane) is a fun simulation of gliding sport - perhaps the only one ever made for the computer except for the fun paragliding event included in Epyx' California Games 2. For those who are unfamiliar with the sport, paragliding is the simplest form of human flight. A paraglider is a non-motorized, foot-launched inflatable wing. It is easy to transport, easy to launch, and easy to land. The pilot is clipped into a harness and oriented in a sitting position for maximum comfort. With a paraglider, you actually fly like a bird, soaring upwards on currents of air. A competent paragliding flyer can stay aloft for hours at a time, climb to 15,000 feet or even higher, and go cross-country for vast distances.

Loriciel's game lets you try your hand at this intriguing sport, with a variety of options. You can choose from 4 different types of terrain, and practice for as long as you want before joining a tournament. Although you can select your alter ego at the start of the game and the country to represent, the game relies solely on your reflexes and good timing - no complex athlete's statistics to memorize here. The controls are a bit difficult to learn if you choose keyboard only, but you will soon get the hang of it. The game represents reasonable real-world physics, with factors such as wind strength and direction to affect your flying.

With bright VGA graphics, fun gameplay, and a unique premise on one of the world's most interesting sports, Paragliding has a lot to offer for both beginners and veterans of the sport alike.

You're standing on a mountain, in front of you is a cliff. You start to run as fast as you can until you're almost at the edge, you jump and... you're flying.

The main aim in this game is to collect as many flags as possible and stay in the air as long as you can while flying with a parachute. Try to catch some warm air, because that means you go up and you shouldn't go too low. Try not to hit anything, cuz when you hit something, you fall down and you're dead... Death means no points and no points means no highscore and no highscore means no glamour. If you land on flat spots, you get the points you've collected and you might belong to the great ones like me ;)

The game itself is ok, not really one of the greatest I've seen, but the idea is cool and original and it's definately worth a try. Don't expect too much of it, but maybe you are amazed by the game and that way, you have done the right thing, haven't you? 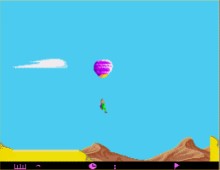