Powered by MatrixEngine, Fate Axis is an excellent - and free- 3D fighting game from Japan. The game sports excellent animations, 6 choosable characters, and plenty of attack moves. The graphics are excellent, although the frame rate is noticeably lower if you don't have a fast 3D card.

In addition to showcasing jaw-dropping 3D graphics that makes the game look more like a commercial title, Fate Axis also sports several neat features not commonly found in beat 'em ups. Each character has a "counter attack" in addition to his/her special moves. They also have many kinds of combo moves, "trick attacks," and "fate attion" attacks at their disposal. This gives each fighter in Fate Axis a much wider range of moves than most other games, and nicely makes up for the relatively few number of fighters you can play. If you like Virtua Fighter, Tekken, or similar games and have a reasonably fast 3D card, check out this extremely well designed freeware old game. Highly recommnded! 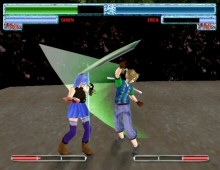