One of the best arcade basketball games ever made, Acclaim's NBA Jam is a great conversion of the blockbuster arcade game to PC. The Tournament Edition features several options not available on the original NBA Jam, including power-up icons that give you special dunk power, unlimited turbo, awesome speed, etc. Besides the power-ups, there are also hotspots that allow you to shoot the ball from certain areas on the court for 4, 5 even 9 points for one basket.

What's particularly fun in this edition is obtaining a dunk power-up and dunking all the way from the other end of the court while starting from a 9 point hotspot, giving you a super-duper incredible 9 point, 80-foot flying slam! For the NBA Jam "purists", the Tournament Mode can be turned on or off, so power-ups and hotspots are only on if you want them. All the other options of the original are still here, such as the difficulty level of the computer opponent, the speed of the clock, etc. The computer AI is competent, and it will take a while to win your first game even in the easy mode.

One of the game's most fun feature is the plethora of secret characters that become available for control by punching in their initials in a certain manner. Included are the traditional Bill Clinton and Kabuki (!), but Jam TE also incorporates several new secret players, including the game's programmer, Adisak. Each secret player has his or her secret slam moves that are very amusing to watch. Besides the secret characters, there is also a way to play with baby bodies. :)

The action is fast-paced and intense, and by keeping the court limited to four players, the ball moves around quite a bit. Perhaps the title?s best aspect is its simplicity in game design -- just grab that ball and sink it! And shooting hoops has never been so much fun. The outlandish ways to dunk -- flips, smoke, etc. -- only add to the wackiness of the game. Even after you have beaten all the teams, earned the expanded rosters and for all intents and purposes beaten the game, NBA Jam TE remains a blast to play. The power-ups, secret characters and hotspots make it a different game every time you play, and it's even more fun when you are playing against a friend or friends. 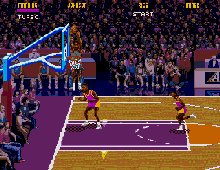