NBA Hangtime is a superb PC port of Midway's hit arcade game NBA Jam (Midway's own port of which is also available for download from this site). Developer High Voltage Software did a great job with capturing the feel of the original game, while coding detailed graphics that support multiple resolutions. Barak Engel says it all about this addictive game:

"I am happy to announce that you don't need to spend any more quarters. Midway has created such a wonderful adaptation of that arcade hit, that I have already ruined (yes, broke) one of my keyboard keys playing it. Its just as fun and addicting as the original, and with the advantage of being at home. The animation's are fluid and rich. The players have those real-life player heads, so everyone look like they do in real life- a very appealing aspect of Jam. The crowd responds to what happens on the field (including the occasional "air baaaall" chant, and boo-ing). The sideline animated graphics of annoyed coaches, team benches and crowd add to the fun. The announcer has the original's flair, and his remarks are as funny and exciting as ever. The background music is just right for the game, adding its own to the involving atmosphere. NBA Hangtime may only be an arcade adaptation, but its one of the best arcade games I have ever seen on a PC. It has an addictive quality that I have not encountered since... I cant even remember when. SimCity, maybe? Midway did the right thing with NBA Hangtime - they took a truly wonderful game and made every effort to make the PC version feel exactly the same. And they deserve praise- I just cant stop playing the damn thing!

Before I go on, for those of you who are not familiar with NBA Jam, here's a short explanation: the game is actually a mockery of basketball, played 2-on-2 full court with players from real NBA teams (all of which have their faces as part of the animation's). "Normal" looking scoring is frowned upon- the more preposterous the way you put the ball in the net, the better. This includes some very interesting maneuvers, like full body windmills, and lots of pushing and shoving. Score three in a row without scoring from the other team, and you will become "on fire", which will not only help you with your shooting or blocking (no more goaltending!), but will actually burn the nets when your shots go through. And if you manage to pull off some really crazy stuff several times in a row, your team will be "on fire", which is great fun and beats Quake easily on adrenalin levels. Fouls are unheard of, as are violations of any kind except the 24 second shot clock and goaltending. Its fast and furious, and loads of fun.

The game's interface faithfully pursues the arcade theme. You "buy in" game quarters by pressing a designated key for each player (which resembles inserting a quarter); this allows up to four players to join into a game in progress. You may have a name/pin combination under which your win/loss/stats record is preserved as you play the game. Should you wish to do so, you may create your own player, and advance his stats as you play games. Using this option is part of the fun, especially as you can put up some very interesting appearances for your self made hoops maniac.

Other game options include all the fun codes that give you a big head, enter tournament mode, have super abilities etc., all accessible during matchup screen. The various codes aren't listed in the manual, so as a public service, you may find the list of codes at the end of the review. During the game itself you have all the trimmings of NBA Jam - on fire, alley oops, team fire and double dunks, pushing, shoving and general violence, lean shots, funny lay-ups, hookshots and crazy dunks... the works.

To get maximum enjoyment from NBA Hangtime, you'll need two things: full screen mode, and a large screen to run it on. Assuming you can supply these demands, and you like the idea of some hectic, fun, 2-on-2 action, then this game is a must-buy." 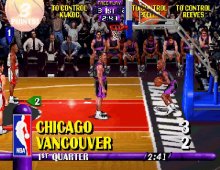