NBA Jam Extreme is an excellent sequel to Acclaim's NBA Jam, based on an arcade game of the same name. The game suffered poor sales as a result of very high hardware requirement: even on the cutting-edge (in 1996 that is) Pentium 133, the game runs very sluggishly at the highest level of detail. Which is a pity, because the game itself is a lot of fun.

Anyone who has played NBA Jam will be familiar with the set-up: you choose 2 players from NBA's leading teams to compete in a 2-on-2 game. The game features a strong 3D engine and ultra-realistic player movement based on motion capture technology. The level of graphic detail is excellent: players look more or less like their real-life counterparts, with similar build and height. Thanks to the official license from NBA, there are over 170 NBA players in the game, each of whom have attributes based in reality. There are 29 teams represented, with 29 corresponding courts you can compete in. Playoffs, Finals, and All-Star modes are available, and any of the 4 players on the court can be human-controlled. One of the best features is "Jam Cam" camera, which zooms in automatically on game action. True to the game's name, you have over 30 outrageous new 'Extreme' dunks to pull off, all accessible by pressing the 'Extreme' button. Over 50 hidden players and secret teams round off this excellent and fun arcade-oriented basketball game that will keep you occupied for hours on end. Highly recommended. 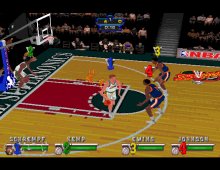